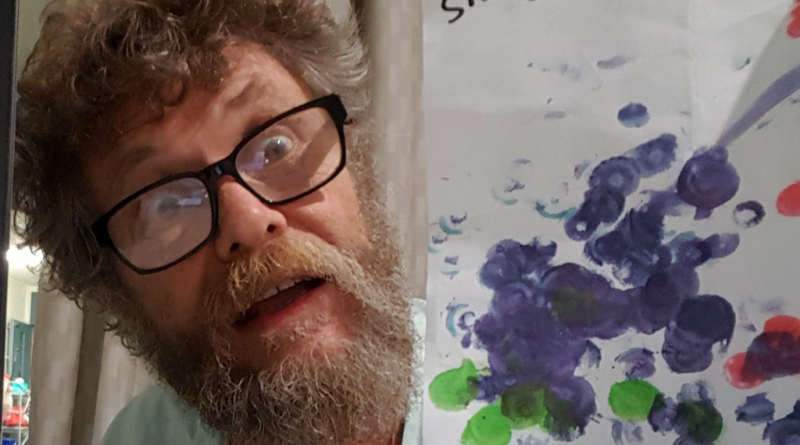 I hope my experience surviving a year alone in hospital, 1000 kms from my home, with no visitors and unable to walk will give people a few clues for developing their own strategies for staying at home or self isolation.

I realised pretty early on that everyone around me in the vascular ward were just lying in bed medicated for pain and zoned out watching TV. It wasn’t doing them much good. The only highlights of the day were when medication or food was delivered to their beds. My answer to that was to create my own routine so that my life had some structure.

The first thing was to get dressed. Although the options were limited I made sure that I changed out of what I was wearing at night and deliberately woke up. I had two Hanfu outfits which were gowns but had some colour and offered some sense of individuality and idenity. I put them on until I could get into more conventional clothes.

I had a chair next to my bed and even if I only spent 30 minutes in it I did so in order to have the experience of getting up and doing something.

I got up early and as soon as the hospital doors opened at 6am I pushed my wheelchair to a quiet place in the garden where I did the yoga practice that I developed for the wheelchair. My practice includes some devotional elements so I had a box with incense, a bowl of sand, candles and devotional images. I arranged them each morning in the hospital garden and quietly did what devotions I do. I made sure to include offerings for the people that I had seen in hospital who were suffering or working under difficult circumstances. I found it helped to write their names on a piece of nice paper and burn it after I had written all the names down so that the smoke mingled with the incense. It was a good way to represent my intentions.

Hospital food isn’t a great culinary experience so I got some sauces and good tea to make my food a nice experience. I also added dietary supplements, in my case Sustagen Hospital Formula and a probiotic so that I was getting the things I needed. Making eating both a pleasant and deliberately healthy activity was quite important in my opinion.

I used the time to watch YouTube videos with good educational content and listen to audio books. I got to study all the sutras and ancient texts that I had always intended to study and I got quite a bit of education in neuroscience and quantum mechanics as well.

It can all get very serious when you are stuck in a difficult situation with little more than your own mind so I made sure to watch comedians that I like. I found stand up comedy with a lot of human observation was a great help. It was funny and also helped me see the absurd side of my own situation.

It was important to stay in touch with people and my only option was social media. It was very useful but I found that I had to limit it to specific times of day. Social media is designed to be addictive and it works very well at sucking you in. Maintaining my own intention and not just getting lost in endless posts was quite important to keep my mind in good shape.

While at one level it speaks for itself I found that it was particularly useful for keeping my circumstances in perspective. After all, I was being looked after night and day by highly qualified staff in a world class medical facility so I really had very little to complain about.

I worked quite specifically to avoid letting anything I was doing become a mindless habit or an addiction. That was the reason for the routine. When it was time to stop YouTube I stopped and had to focus on whatever came next. I used medication only when I needed it and kept it to a minimum. I have written about pain management elsewhere and I would use everything I had at my disposal to deal with pain before I reached out for medications. Unsurprisingly, I got better and better at pain management and the sense of achievement that came with that was also a great internal support.

I kept two thoughts in mind. a) I had a choice, I could be happy or miserable and I thought miserable was a poor choice so I did what I could to be happy. b) I had a choice between suffering or disciple. They were my only choices and of the two discipline had by far the better outcome so I stuck to my schedule and my practice. All too often people give up their practice right at the time they need it the most. I was aware of that and was determined not to fall into that trap.

To keep myself aware of the love that was there for me I keep a painting that my 2yo grandson did for me beside my bed all the time.

I hope my experiences surviving a year in a ward of critical ill people, many of whom died, can help others think about their own situation in this difficult time and plan to not just survive to but learn and grow as well. 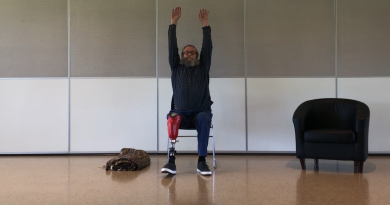 Introduction to Yoga For Mobility video

Losing a limb can turn your life upside down